Annalee Newitz nailing  Rumsfeld's DoD and its effort to regulate wireless digital communications to eliminate the possibility of open networks:

I hope Annalee is spending some of her time at MIT with a couple of my old profs, Sherry Turkle and Gene Skolnikoff.

And Lisa Rein points me to Michelle Goldberg's "Salon" piece on the Shrubbyist Right, which asks at the end "...why the right hates so very many Americans."   Exactly!   Ms. Goldberg, in "IT'S A RIGHT-WING HATE FEST BABY!"  discusses the annual CPAC (Conservative Political Action Com) conference across the Potomac from the White House

"a world where passionate worship of the president is part of a brave rebellion against government, where Sweden is a hellish dystopia and Tom Daschle a die-hard Marxist.   ... (where)  right-wingers still fancy themselves an embattled minority facing an army of wily, ruthless leftists, who they hate with the righteous fury of the downtrodden."

Here is the link to full text of the Salon article in case Lisa's  link goes bad, it's worth reading:
http://www.salon.com/news/feature/2003/02/04/cpac/

Emailed to my people early this morning:   http://www.jimpivonka.com/unpublished/facesofthedead.html
Jerry Bass and others have mentioned they are forwarding it, (especially the Quiz on Iraq  - thank you for that, SP!) and Jerry sent the full text of Yeat's prophetic "The Second Coming" - which reminded me to find a Google cite for Virginia Bartholome Rohan!

Turning and turning in the widening gyre
The falcon cannot hear the falconer;
Things fall apart; the center cannot hold;
Mere anarchy is loosed upon the world,
The blood-dimmed tide is loosed, and everywhere
The ceremony of innocence is drowned;
The best lack all conviction, while the worst
Are full of passionate intensity.

Surely some revelation is at hand;
Surely the Second Coming is at hand.
The Second Coming! Hardly are these words out
When a vast image out of Spiritus Mundi
Troubles my sight: somewhere in sands of the desert
A shape with lion body and the head of a man,
A gaze blank and pitiless as the sun,
Is moving its slow thighs, while all about it
Reel shadows of the indignant desert birds.
The darkness drops again: but now I know
That twenty centuries of stony sleep
Were vexed to nightmare by a rocking cradle,
And what rough beast, its hour come round at last,
Slouches toward Bethlehem to be born?


Domestic Security Enhancement Act of 2003 "Patriot (Repression) Act II" --Unreleased proposed legislation -- The next step in the Shrubbyist program of fascist repression in the US (from CLG):   The Bush Dictatorship is preparing a bold, comprehensive sequel to the USA Patriot (Repression) Act which will give the government broad, sweeping new powers to increase domestic intelligence-gathering, surveillance and law enforcement prerogatives, and simultaneously decrease judicial review and public access to information. Available in full text (.pdf 12 MB)

The History News Network has pointed me to E.J. Dionne's column on the budget today - with this quote:

Reports out of the White House indicate that the administration hopes to use a quick victory  in Iraq to push through this radical agenda.

Based on today's postings, HNN should be on your daily reading list, if you want real news, rather than Faux News, the CNN "Censored News Network", and the rest of US TV news organizations' right wing propaganda programming. Yes, I know some of these indicate the print media is doing better than the TV networks - if only anyone read any of it.

The Shrubbyists have no economic plan other than war, every part of their domestic agenda depends on perpetual war.
It is the Shrubbyist political agenda that drives their need for perpetual war,
not oil and not terrorism.


Alan Bisbort of the Hartford Courant, who I gather has long seen Colin Powell as a solitary beacon of light in the Shrubbyist black hole universe, was not favorably impressed by his UN performance.

The Changing of the Guard:   Looking for Alan Bisbort's piece on the WWW led me to very interesting weblogs and sites - these are NOT institutional, nor are they provided by members of the "60's" generation, the boomers.

I have, until proven wrong, given up on the boomer generation's ability to ever effectively grasp, use, or utilize the internet and web.  Their slowness and resistance in these matters is mind boggling - uh, y'know,  mind blowing I guess is the right phrase, y'know?  WTF is going on with them/us?  FOLKS, IT IS JUST NOT THAT DIFFICULT!   It is useful, and it is important.  And the new learning will help you stave off senility!  Get with it.

Here are web sites, indicators of  where hope for the future may lie:


To view the "Walter Miller Homepage" and see his assessment of various radio and TV commentators (I went for the Charlie Rose note, you should too.) you have to turn off java scripting support in your browser.  If you do not do that, you will be redirected to a Yahoo GeoCities "Page Not Found" message.  Interesting.  I wonder, who does not like Walters' unique and very funny commentary on commentators?   http://www.waltermillerhomepage.com/novx1.htm

Material by Bill Mandel and myself which was originally  posted on the 5th and 6th of February  has been moved to the 'Drafts' section at the end of today's weblog.

I will eventually move the material  to a separate file after revising and editing both my original posting and my response to Mr. Mandel's letter.  My rewrite may combine and reconcile (and possibly expand,  lest we forget the greats - Borah, La Follet, Norris) my postings.   Fair notice!

Pentagon nutcase: France 'no longer ally' According to the head of the Pentagon's top advisory board, Richard Perle, France is no longer an ally of the United States.  The NATO alliance "must develop a strategy to contain our erstwhile ally or we will not be talking about a NATO alliance" Perle said in Washington Tuesday.
http://www.upi.com/view.cfm?StoryID=20030204-031831-1626r

Mill Valley Seniors from the Redwoods retirement community demonstrate every Friday at the intersection of Camino Alto and East Blithedale.  Here Mabre Krueger, 88, makes her way to the weekly anti-war protest organized by a group of residents from The Redwoods retirement community. Dozens of protesters  attend the demonstration, many using canes, walkers and wheelchairs as they stand by the roadside waving signs and singing protest songs. (Photo/Jeff Vendsel)

Shrubbyist War Plans - Attack Progressive Tax System!  The LA Times editorializes that "To avoid the economic abyss, Washington must resist the urge to pass a raft of tax cuts that would further enrich the wealthy while starving the government."
http://www.latimes.com/news/opinion/editorials/la-ed-budget5feb05,0,9526.story?coll=la%2Dnews%2Dcomment%2Deditorials 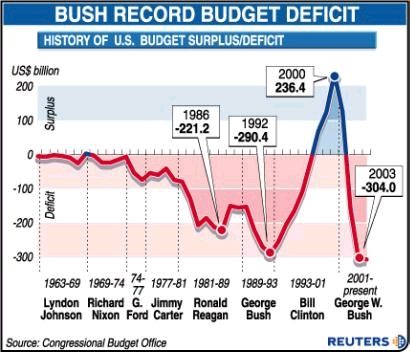 The effects of the Reagan/Bush and Shrub deficits on the availability of money for any public purpose (other than war and assassination campaigns overseas and  spying on and suppressing domestic opposition at home) is readily apparent (example here).   Allen Sloan, of Newsweek, has more:   "Bushs Depressing Economy - Everything will work out just fine, the president says. But a close look at his economic record so far suggests that he  has a fuzzy math problem."

Media Concentration:  "Take Back the Media" is a web site that exposes the concentration of media ownership in the hands of private and right wing ownership groups, and provides suggestions and tools to counteract this trend.  If you wonder why the US public is so ill informed, and so misinformed, spend some time here.

It is only those who have neither fired a shot nor heard the shrieks and  groans of the wounded who cry aloud for blood, more vengeance, more desolation.  War is hell."  William Tecumseh Sherman

War will exist until that distant day when the conscientious objector enjoys the same reputation and prestige that the   warrior does today."   John F. Kennedy

"Conceit, arrogance and egotism are the essentials of patriotism... Patriotism assumes that our globe is divided into little spots, each one surrounded by an iron gate.  Those who had the fortune of being born on some particular spot, consider  themselves better, nobler, grander, more intelligent than the living beings inhabiting any other spot.    It is, therefore, the duty of everyone living on that chosen spot to fight, kill and die in the attempt to impose his superiority upon all others."   Emma Goldman

This was a very bad day.

A marvelous example of life in that "freedom loving democracy", our ally in the Mid East, Israel, is found at "Liberating the Wall"  See also "Oprah, Dr. Phil, Playboy--and Me "

I touched on the topic of "conformity" in the log for January 24, 2003.  The academic work on the topic, and its history as a football among political theorists, is far more extensive than I had realized.   For anyone interested, a superb  review of the literature on research into conformity and persuadability, with considerable attention to social ("peer pressure") and individual (self concept, variations in self esteem and self efficacy) - aka "locus of control" - factors affecting conformist/nonconformist behavior, is found at "Self-concept and conformity in theories of health education" (Thesis by David Regis, University of Exeter, PhD. in Education in the Faculty of Education).